"If i had known we were going swimming, i would have brought my camo thong"- Socom 2

Chief Petty Officer Bailey Ivarsen, Callsign "JESTER" is a Navy SEAL, a main character and a member of ALPHA team In The SOCOM series.

Jester so far has appeared in the first three SOCOM games. In the original Socom he was not in Able Element, but in Bravo with well known Spectre (Player 1 in SOCOM 2 & 3). In both SOCOM 2 and SOCOM 3; he is as said, with SPECTER (you) in Able. He will always cover you and will never be more than 10 metres away (even if you tell him to!); unlike Wardog in SOCOM 2 who gets stuck to pretty much everything. His trusty M4A1 will be a key component to contribute towards victory. 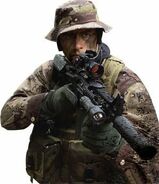 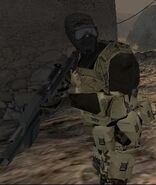 Jester in SOCOM 3: US Navy SEALs 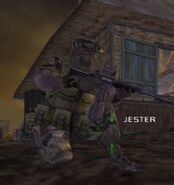 Jester in jungle outfit in SOCOM 3: US Navy SEALs
Add a photo to this gallery
Retrieved from "https://socom.fandom.com/wiki/JESTER?oldid=5484"
Community content is available under CC-BY-SA unless otherwise noted.