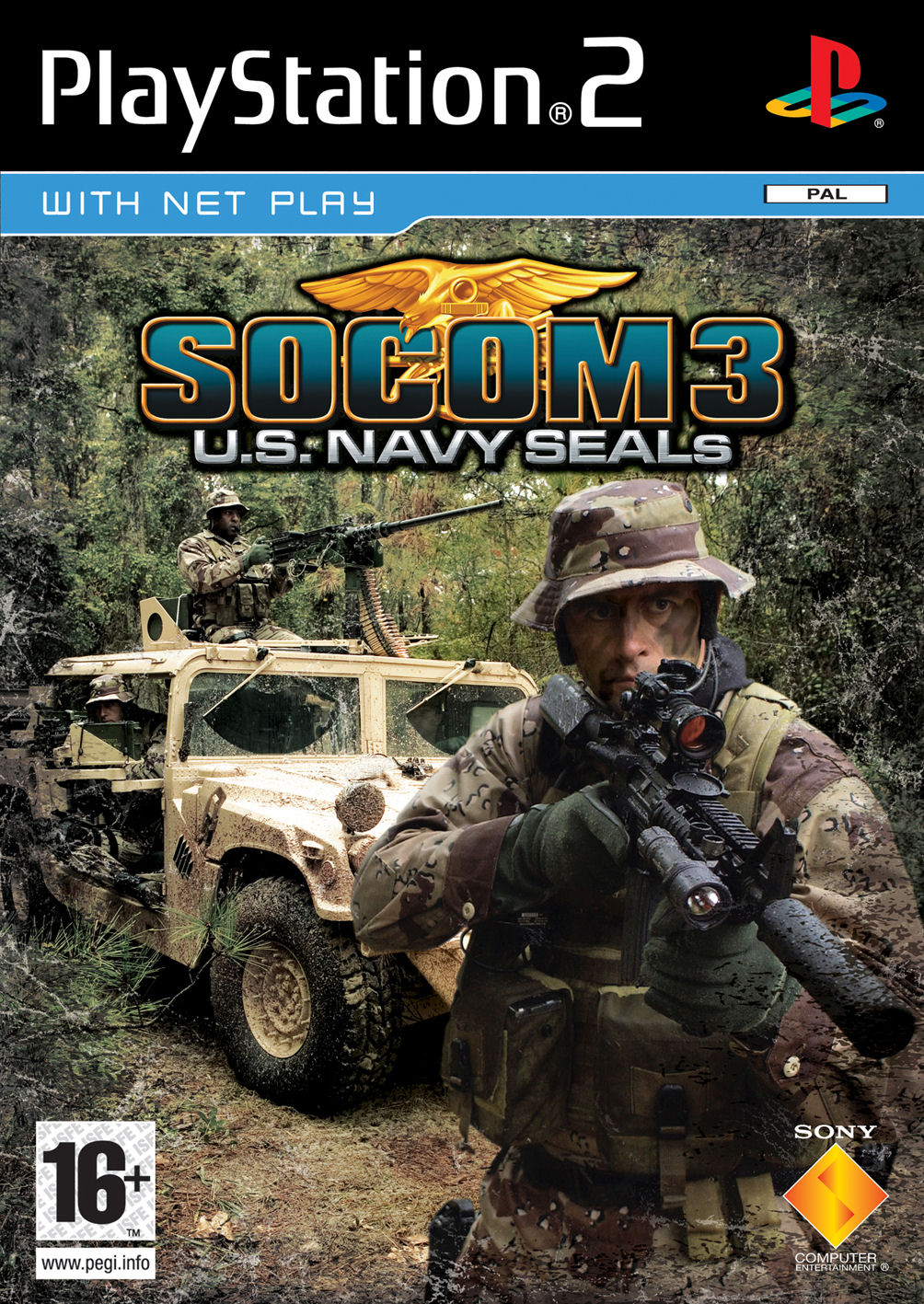 SOCOM 3: U.S. Navy SEALs, is a Third-person tactical shooter video game for PlayStation 2 and the sequel for previous games SOCOM: US Navy Seals and SOCOM II: U.S. Navy SEALs. The game was developed by Zipper Interactive in collaboration with the Naval Special Warfare Command and published by Sony Computer Entertainment. SOCOM 3 was released on October 11, 2005, and was added to the list of Sony Greatest Hits games on August 4, 2006.

SOCOM 3 is a third person shooter. tactical shooter that combines the elements of strategy, stealth, reflex and hand-eye coordination. There are 14 different single-player Missions: 6 in North Africa, 3 in South Asia, and 5 in Poland, plus an optional training mission stationed in North Africa.

One of the main focuses for singleplayer is unlocking new character models, weapons, and weapon attachments for the online multiplayer mode (more detail later). Every mission has primary objectives, secondary objectives, bonus objectives, and crosstalk objectives - which are compatible with the Sony PSP game SOCOM: U.S. Navy SEALs Fireteam Bravo.

SPECTER (the player) and JESTER are the Able Element.

The SEALs in Bravo operate closely together and execute Specter's orders as a pair. Bravo can be almost anywhere on the "op area" of the map, giving you flexibility in suppression of enemy forces, ambushes and extraction of the personnel.

Like in SOCOM II, the Bravo Element is occupied by different operatives, changing for each Area of Operation.

General Heydar Mahmood's North African Patriotic Front (NAPF) forces are invading a nation in North Africa, specifically Morocco. General Mahmood vows to rebuild Africa and confront the Coalition for Humanitarian Aid (a UN-style organization which has placed sanctions of Mahmood's nation.) Like in SOCOM 2 , Mahmood has been terrorizing the region with his massive army and the story of his terror continues in this operation. The Bravo team for this area of operation consists of SEALs Killjoy and Simple. The SEALs are also supported against the NAPF forces by local resistance fighters, the U.S. Army and CHA peacekeepers.

A gang calling iself The Fist And Fire, led by Hari Raman, has been severely looting suspected ships that carry weapons and firearms in the Bay of Bengal. The group sells the pirated weapons to the black market to obtain money for their own use. The Fist and Fire also have links to Al-Shakoosh, an Islamic Extremist terror group conducting a terror campaign against South Asian governments. Bravo consists of British SBS operatives Chopper and Flash and the team receives some help from local villagers.

Poland has entered a new period of economic prosperity, but this being threatened by a well-armed, ultranationalist terrorist group known as The New Slavic Order (lead by Dr. Basia Mironova and Krzysztof Gryc), who are attempting to use chemical weapons to achieve their aims. Bravo consists of Polish GROM operatives Deadpan and Coldkill. According to the in-game briefing dossier, Miranova "is a former Soviet scientist who has freelanced for various terrorist organizations and rogue regimes since the collapse of the Soviet Union". In a cutscene she is shown testing a nerve agent on a human subject, whom she calls a traitor. In the same cutscene it is shown she enjoys listening to opera music and is hit by New Slavic Order leader Krzystof Gryc. After he leaves she says to herself that she would like to experiment on him. She is also an unlockable character for online play for the Poland region maps. Her character can only be played as a terrorist.

Several factors determine success of your mission. Perfection for any factor is 100% for completing all objectives. The player receives a grade (A-F) evaluating their performance on the aspects of stealth, accuracy, teamwork, and mission completion.

Stealth - Each time the player's team is discovered and the enemy communicates your presence to others, you lose points for stealth.

Accuracy - Hitting targets increases player's accuracy ratings, while missed shots lower it. The accuracy of your teammates are also counted.

Teamwork - The player must use his team for cooperative engagements. The more the player uses his teammates during the course of a mission, the higher player's Teamwork rating.

Player's mission is considered a failure under the following conditions:

There are also some special mission-select failure conditions, such as being detected (Nightcrawler and Waterlogged), failing to defend an object (one of the North African and one of the Polish missions), and others.

When SOCOM 3 was released unto the public, it gathered a mixture of positive and negative reviews. Fans of the previous installments felt that the new camera and aiming system was an unwelcome change from their SOCOM and SOCOM 2 counterparts. They also felt that the intimacy of the SOCOM 2 maps was lost in the transition to large-scale, 32 player combat, faulty squad A.I. during single-player, as well as a short single player campaign. Many complaints were brought up because of the lack of SOCOM and SOCOM 2 maps in SOCOM 3, which many felt were better than the current maps. Zipper has since been releasing Map Packs, but the poor communication and the long delays have not satisfied the community. On the positive side, the customization options were well-received by some people, and many people felt the Single Player was better overall than previous games.

In the past, online play is a huge contributor to the game's success. In SOCOM 3, players can team up with others from around the world and compete as a SEAL unit or Terrorist force.

Players may exploit glitches to give them an edge over the competition and these players are heavily frowned upon by the SOCOM community. Cheating also includes the use lagswitches, which are modified Ethernet cords that allow players to purposefully lag, and the use of "mod disks".

Many games carry the label "Glitch No Kill" or "GNK", for short, and are large level rooms where there is no combat, only glitching. This encourages the spread of glitching, as the knowledge is shared between users. In these rooms, no combat is permitted, and anyone who fires upon another character is booted out of the room by vote. Also, there are clans that are made solely for glitching.

At release, SOCOM 3 had 12 original maps. As of March 31, 2008, there are a three downloadable map packs, with a total of 11 maps between them, bringing the total number to 23 possible maps. Here's a list of the maps:

Zipper Interactive decided to require SOCOM 3 players to verify their identities by using a credit card, debit cards, or VISA gift cards. If the players do not verify themselves, they will not be granted ranks, allowed to join friends' lists, ranked games or even clans. It was a controversial decision; many players have responded with ire on the game's official message boards, and several have formed online petitions to protest the change. The PAL version of SOCOM 3 did not need to be verified for online play.

The SOCOM blog, set up by the Sony PlayStation team to give players a look at the making of the game, stated that this was meant to keep SOCOM cheaters away from the game, but it has not stopped cheaters. The cheaters can also use credit cards to log on and freely exploit game glitches, since no one monitors matches. Zipper, however, does encourage using the in-game exploit forums to report cheaters. Zipper announced that it is too late to change credit card verification and it was also implemented in SOCOM: Combined Assault.

As of late new accounts are considered verified.

The SOCOM 3 ranking system is currently frozen as of March 19th 2007. The system uses many more naval ranks than the previous versions, including most of the enlisted and officer naval ranks. However, the ranking system has encountered a few problems. The requirements for attaining higher rank when you start as an enlisted Seaman is different from the system used by the officers. Advancement in the enlisted ranks is attained by playing in full games, regardless of the outcome.

After completing 75 games and having 50 wins, the player is moved to the officer rankings, where rank is determined by the player's place in the game ladder. For example, the lowest rank of Ensign is assigned to the lowest 19%.

The SOCOM 3 2.0 Update (Patch) has been released. This SOCOM 3 update addresses a lot of the major issues that have been discovered since the release of the 1.7 Update, issues identified after the Map Pack 1 release, as well as compatibility issues between SOCOM 3 and SOCOM: Combined Assault. General:

All of these glitches have been fixed in the new 'SOCOM: Combined Assault' game. All except for the "360" glitch used to gain entrance to the single player map on the multi-player game of Anchorage. Also, in Anchorage, "skywalking" is still not fixed. It is only attainable through several other small glitches. Single shots are still sounding like multiple shots.

The guide covers all aspects of the game, and includes maps and walkthroughs. Piggyback's guide was developed in conjunction with Zipper Interactive and Sony Computer Entertainment America, with the multiplayer section being written by a well-known SOCOM gaming clan, the Sea Snipers (clan tag [SS]). The multiplayer section has renderings of all multiplayer maps, discussions of the various online modes, and suggestions about teamwork and tactics.

Retrieved from "https://socom.fandom.com/wiki/SOCOM_3:_US_Navy_SEALs?oldid=5434"
Community content is available under CC-BY-SA unless otherwise noted.