Commander Dimone Freehold, Callsign "SPECTRE" is a Navy SEAL of SEAL Team 3, a character and a protagonist in the Socom Series

A Chicago native, Commander Dimone Freehold is a U.S. Navy SEAL, part of Fireteam Alpha who is an expert marksman and specializes in military ops in urban terrain. At some point in his military career, Specter made his way into BUD/S SEAL training. During the training in SEAL school he acquired skills such as demolitions training, advanced weapons tactics, military explosives, combat diving, small unit tactics, patrolling techniques, land warfare, special reconnaissance, HALO/HAHO airborne training, and many other useful skills.

Spectre has served with SEAL Team 3 for many years, through many unconventional wars. During an operation in North Africa. Spectre led his SEAL team on the frontline in a war against the North African Patriotic Front. U.S. Navy SEALs provided support to a local guerilla group disrupting NAPFs war efforts. Spectre and the SEALS were inserted and met with the resistance. After this, the SEAL team lent support on an ambush on a convoy of trucks. From there they proceeded to sabotage and destroy a radio tower providing communications for the NAPF war effort. After completing their objectives Spectre and the SEALS meet with the resistance leader codename "Sand Lion". Other missions such as "Escalation" included destroying enemy armor tanks in the area.

Demolishing a bridge and disrupting enemy supplies logistics. During the mission "Riposte's Primer", the SEALS were responsible for blowing up surface to surface missile launching platforms. After planting C4 charges on all the missile launcher sites and eliminating several NAPF fighters. The SEALs succeed in disrupting the NAPF and pave the way for the CHA invading force to enter and provide support in the war. Spectre led his team in several more war tide turning missions including defending against waves of NAPF forces and armor. Finally the war in North Africa came to an end when the SEALs captured Heydar Mahmood.

Spectre talking to Mallard in the first mission in SOCOM II: US Navy SEALs 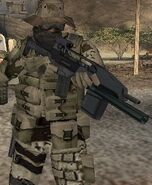 Spectre in desert camo in SOCOM 3: US Navy SEALs

The Hot Toys figure of Spectre

Add a photo to this gallery
Retrieved from "https://socom.fandom.com/wiki/SPECTER?oldid=5481"
Community content is available under CC-BY-SA unless otherwise noted.